Interest in SET comes from a diversity of supporters with a range of different reasons for their donations.  In this and subsequent blogs we want to recognize the generosity of all by regularly featuring some of our donors and their interest in SET.  Through these profiles we hope to deepen the understanding of SET’s purpose and values.  Although we choose some SET contributors to profile, we invite everyone who would be willing to be featured to contact Heather Barclay at haasbarclay@hotmail.com . 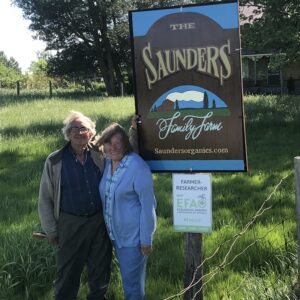 To the roots of their being, Margaret and Harold Saunders believe in the power of giving.  Since the early seventies, the couple have lived on and worked their organic farm in Denfield, Ontario, where giving back to the earth, to their local community, and to the world has guided them.

In 1978, when they made their farm strictly organic, this decision came from an awareness of effects on the earth from certain chemical fertilizers.  With organic farmers from Europe, the Saunders learned a philosophy of stewardship to meet nature’s needs naturally: “To look after the land by giving it back what it requires from the gifts it gives us.”

The couple continue to learn and to teach, giving others the benefit of their experience.  Not just to other organic farmers, but to those who purchase their organic eggs, lamb, vegetables, and Harold’s own open pollinated seeds.  In their support and encouragement of a Black Indigenous People of Colour (BIPOC) organic farmers’ group they take great interest in the diversity of farming practices along with sharing their own experiential understanding.

A belief in the divine worth of each human being has led the Saunders to international giving.  They have mentored children in Brazil and Uganda. These connections have been made from a practical values’ base which prioritizes an organization’s personal involvement with those people it supports.

“We like to give to organizations where we personally know the people who travel to visit the children we support,” Margaret says.  “We’re also impressed with agencies that give 100 % of the money they receive directly to those they support.  SET does both.”

As to other reasons the Saunders give generously to SET, Margaret sums it up through the importance her mother put on education, something the couple have passed on to their two daughters, three grandsons and one granddaughter.

As Harold puts it, “If we can educate kids where they live and offer them effective teachers in their schools, they will stay in their own communities and promote education there.  Education is the only way forward for this world of ours.”

Margaret adds, “And when SET offers the kids solid and safe schools where they’re not distracted, they learn better.