Situated in a cluster of villages, Adokpoé elders petitioned SET for a school as solid as those of neighbouring communities.  For example, in Agbelouvé where SET built its first school in 2011.

Constructed almost fifty years ago the main Adokpoé School and two lean-to classrooms appeared in very poor condition when directors Don Barclay and Simon Carette visited the site in 2017.  Despite the disrepair, approximately fifty per cent of the students go on to secondary school.  Some credit for this success could be given to the principal of Adokpoé, a high-powered woman, Degbe Akossiwa Drake. Under her direction, on Wednesday afternoons when schools are closed, Adokpoé students return for review sessions.

In 2017 the school opened its first kindergarten for 71 children.  Reasons for the high priority of education in the village relate to the quality of life parents want for their families and country.  But, having a high-powered village chief who is a former teacher also helps.

The SET Board agreed to build in Adokpoé.

This school was to be very special.  An anonymous supporter donated the complete cost of the building in honour of the late Robert (Bob) Barclay, one of the founders and past president of SET.  Nancy Pope and Bob McKay, long-time friends of Bob, donated the funds for the school’s desks and education supplies.

The Robert Preston Barclay School opened its doors to the 438 students and seven teachers in early 2018.  Bob’s enormous contribution to the children of Togo through his work with Sleeping Children Around the World and Support. Education. Togo. is recognized each time a Togolese child sits down at a desk to learn. 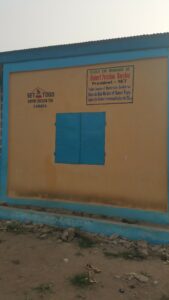