WE NEED YOUR COMMITMENT TO BUILD SCHOOLS AND A SOLID EDUCATIONAL FURTHER FOR THE KIDS OF TOGO. 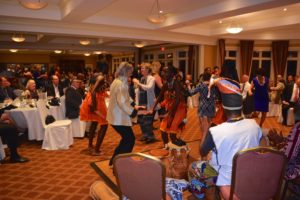 Sold out well in advance the Fifth Annual SET Gala raised $55,000, a record profit.  Because of the generosity of guests and donors more than enough money was raised for a Togo school.   After covering the cost of the steel-roofed, solid concrete building money remains for desks for the three classrooms and school supplies. 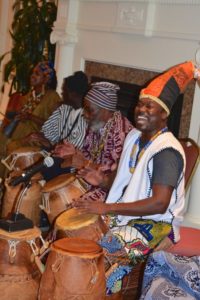 The West African dancing and drumming put on by Isaac Akrong  and his troupe brought the feel of Togo into the room.  Full of spirit, infectiously zestful, the troupe showed off a wide variety of costumes, colours and rhythms.  Many thanks to The Royal Bank for sponsoring the entertainment.

Perhaps one of the most touching stories to emerge from the 2016 SET Gala came from the dining room staff of the Lambton Golf and Country Club.  On their own initiative they decided to add to this fifth anniversary of an event they have worked to make better and better each year.  For each of the tables they bought a bowl of red roses to recognize the Togo school children who struggle so hard for an education. 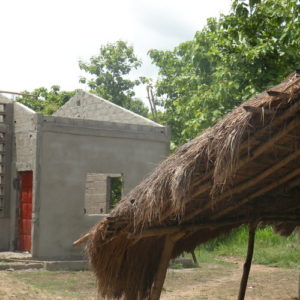 Five years of SET Galas have contributed toward the building of 11 schools plus two school renovations in southern Togo.  Now more than 2500 school children can learn in a safe, comfortable environment.  The money from the Fifth Gala will be used to build the twelfth school in Bédjémé, a community with tremendous drive and commitment to its children.

For the time being, the SET directors have decided to seek other avenues to fund raise for future schools. As all good things should, the SET Galas end on a high note.   Thanks to the hard work of chief organizers Anne and Simon Carette and to the gifts of so many who care about the future of the children in the tiny country of Togo, West Africa.